I need to backtrack to last Wednesday because I didn't post about this because I was sad and trying to compose my thoughts. Eddie's foreleg had gotten really odd-looking, and we were seeing problems with both of her hind legs. And she was making some weird noises that we thought might be pain. So I took her back to the expensive cancer doctors for a checkup.

They were very alarmed at how fast the muscles in her right front leg had atrophied. In just seven days the muscles had failed at an alarming level. Even without the MRI they were positive that severe damage to the spinal column had occurred, and the Lymphoma was the only likely culprit. Unfortunately there are very few drugs which can attack Lymphoma in the spinal column-- none of the chemos they had previously given her would work in those areas. They said it was very unlikely to be able to save her, and they had had very little success with this chemo in general, but Lomustine was the chemo most likely to be able to do something.

I really didn't have the money, but I committed to tossing this on a credit card and giving Eddie a chance. They took Eddie back to do the prep bloodwork... and couldn't do it. Lomustine is very hard on the liver. And somehow in the last week since they had seen Eddie, her liver had gone from "healing well and no evidence of cancer" to "off the charts not okay". Her ALT value had gone from mid-300s to above a thousand, which is the highest their gear can measure.

The doctor would not give this chemo to Eddie since he was fairly certain it would cause total liver failure. In short, a very painful death sentence. The lymphoma had apparently gone crazy on her system in just 10 days since the last chemo treatment. Her body was no longer capable of handing the only chemo which was known to attack lymphoma in the spinal column.

This was it. No more potentials. No more things to try. No more hope.

This was my fragile state of mind when I left for Portland.

Why, oh why, do we need to deal with logistics when we can barely handle our grief?

So I just got off the phone with her cancer doctor, and he is firmly convinced that there is nothing left he can do. We can give her some pain meds, but those generally make her doppie. She doesn't express any obvious evidence of pain, and she still wants attention. So it's really not clear that pain meds would improve her life, if she's too doppie to enjoy attention in her last days.

But it's coming, and its coming fast. She lost use of 3 legs and is losing control of her tail over the weekend. I really don't know if she's going to pass away any minute now, or if she'd just become a cuddle blanket if we don't put her down. I suspect the spinal corruption will end it for her one way or the other. Do we wait until the last minute, or do we pick a date and time?

Logistics. Is death good for you today? How about tomorrow? When does death fit into your schedule?

I don't have the words for this. 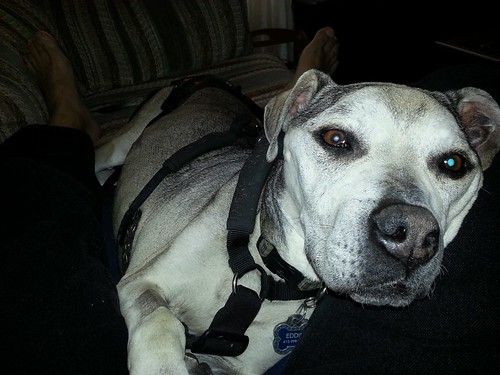 Eddie cannot use her legs. Her front forearms fold underneath her. Her rear legs won't fold or flex as she desires. The only thing she seems capable of doing is thrusting them outward.

So I had brought Eddie out into the yard for some sunlight and external interests. After about 20 minutes of being outside, I started to nap a little beside her. I woke to a wild crashing sound. Confusing, I sat up and looked around to find that Eddie had managed to get herself about 20 feet away from me and headed towards the big walnut tree in our yard.

I couldn't believe my eyes. She was moving across the yard in a series of very unfortunate and painful lunges. She would thrust out her rear legs to push herself into the air. She would come down in her front legs, which would fold underneath her and she would faceplate hard into the ground. It was about one foot of progress per lunge at best, and sometimes not even that.

I ran to pick her up. I wasn't quite sure where she was headed so I walked slowly with her until she turned her head as we passed near the small fruit trees. The ground showed clear evidence that this was her bathroom. I laid her down, and she used the bathroom, then looked up at me to let me know she was done.

I am not kidding you, if I had had a camera handy you would disbelieve how much effort she was putting in to get across the yard to her bathroom. And my yard was big--she would have made hundreds of these lunges to get there. It was amazing. That girl has ten times the class, twenty times the gumption I would have if I were in her shoes.
Collapse